The largest man-made object to be in outer space is the International Space Station (ISS), and for years, amateur astronomers have been enjoying observing it drifting past the sky. It can actually be seen from anywhere around the globe with the right conditions. Many people made it a part of their hobby, just like watching meteor showers or even just stargazing.

If you only knew about it just now and would like to start doing this, but then you don’t know how to or when to observe it in the sky, this will be your guide. Also, if you own a telescope and you’re wondering if you can use it to observe the ISS flying through the sky, then yes- you can actually do that.

The International Space Station is a high-tech space station where work and experiments are done by astronauts living there. It orbits the Earth at around 17,000 miles per hour and is nearly 300 miles up in space. It’s a multi-billion-dollar model by five space agencies: NASA, CSA, ESA, JAXA, and Roscosmos. All its pieces were assembled in space.

Due to it being so high up in space, the space station is still bathed in sunlight throughout its orbit since the Sun never sets in when you’re in space. Sunlight then reflects off the station’s extensive “wings” or its solar panel, just as sunlight reflects off airplanes or mirrors.  That is the reason why the ISS and other satellites are visible in the night sky. 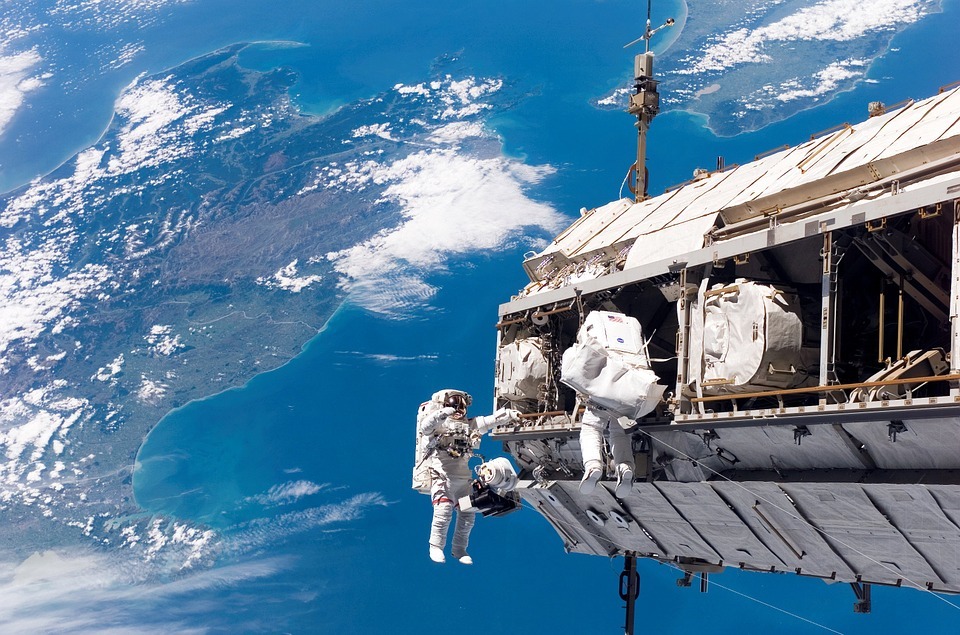 The ISS has recently become brighter and grown larger. Now, it’s often so bright that you don’t even need to be an astronomer to observe and follow it as it passes through the sky. The only thing you need to know is the time you can start to look for it.

Every year, the ISS remains in sunlight during May and June throughout its orbit. For astronauts, the Sun never really sets. Skywatchers can witness the ISS passing for about 5 to 6 times each night since it circles the Earth every 90 minutes, the first passing during evening twilight and the last passing at dawn.

The space station always travels east and can first be seen in the western sky. You should try looking for a bright and pale yellow star-like object that has a steady light. The station appears subdued when viewed at low altitude since there’s more lateral distance between it and the observer. Although subdued, it’s still shining as bright as the star, Vega. When the station makes an overhead pass, it’s as close as it can get with only about 250 miles distance, and outshines all other objects in the night sky except for the Moon and Venus.

The ISS is at its peak brightness when the Sun, which is on the opposite side of the planet, is directly illuminating the satellite, just like what occurs during a full Moon. Even with the increase in the lateral distance, the full illumination compensates for it for a short amount of time. It appears fainter as the ship makes its first appearance in the west since the angle of the station to the Sun is slight and shows a “crescent” ISS.

What equipment do I need?

Amazingly, you can spot the ISS without using a telescope. Although, you can also use a pair of binoculars or a telescope if you own one. However, the ISS moves very quickly, so some find it a bit hard to view using a telescope with a high magnification eyepiece. It’s easier for those with a pair of binoculars to view the ISS, and they will also make the station look a lot bigger and brighter. It even enhances its colors.

For those with a telescope, there’s an easy way to view it. Viewing it through the telescope allows you to make out the craft’s shape, especially its golden solar arrays that are Kapton-insulated. For starters, you can use a wide-field eyepiece with  65× magnification. Right when it’s low in the west, you can catch it just as it’s moving with a slower apparent speed. The key to succeeding is to use a low-power finder scope. Aim it at the space station and note down the direction of travel. The next step is to anticipate which spot the station will be reached in a few seconds and then set the crosshairs there. After that, go and make a quick return to the eyepiece. It may be a bit hard at first, but you’ll get the hang of it after trying a couple of times.

If you’ve already mastered the art of ISS watching and want a little bit of a challenge, you can participate in the ISS Marathon, as what sky watchers informally call it. All you need are clear skies and the ability to stay awake throughout the night.